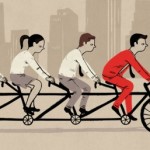 A portion of “our” most formative adult years occurred during the dot-com area. Wow, those were strange times. They were years with big stock market multiples; and they were years full of ill-conceived internet company business plans (yes, many of them were just that) that even attracted private and public market capital. Talk about the wild, wild west. Even grandma’s at the local bingo parlor threw around words like B2B or B2C, and everyone had a stock tip for everyone else. You could’ve thrown a dart at a list of ticker symbols, and you would have picked a winner.

They were also years marked by outsized executive personalities (and compensation packages for that matter!), and poor solutions by Wall Street for addressing conflicts of interest. CNBC used to parade many of the same faces around on a regular basis, and they became household names. The celebrity CEO was at its zenith. The more famous the CEO, the higher their stock price went (and everyone else for that matter).   Then one day in 2000, the world woke up and realized it had a giant hangover from its night of partying and debauchery. Companies had become bloated with debt, and overextended in their strategic focus. As an aside, several of those celebrity CEO’s, it turned out, had spent too much time speaking with the financial press and pumping their stocks, and too little time keeping their heads down and running a good company. Some of their activities during those years earned prison time for a handful of them.

Since then, the world has been through another financial crisis, and another meteoric rise. Business cycles come and they go; and the current one will “always be different this time.” Well, it rarely is. The same great companies that survived recent recessions shared several key characteristics. At the top of that list? Executive management who focused intensely on running a great business. And they’re generally not the people seen on the morning financial programs on television. Usually the best executives are too busy for regular appearances on TV, because they are executing the strategy set forth within their organizations. And, to no one’s surprise (at least in retrospect), they end up building and running enduring terrific companies, while the scattered, promoting, celebrity CEO types end up fired from their jobs. Great, focused leadership never goes out of style.