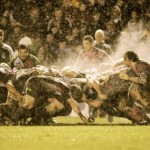 In the wide spectrum of human emotions, regret simply must be considered the worst of the bunch. This is particularly true of people typically considered successful, lucky “overachievers” (not that luck has anything to do with achievement). To be powerless to go back and change or fix an event, regardless of how long ago it happened, can eat away at a person for a long, long time. And if that something was or is important enough, even the endless tricks or diversion strategies that we employ to make the feeling go away never really make it all better. Sources of regret result broadly from two categories.

The first is from things we have done – acts of commission. It might be something that was said to someone important that we would do anything to take back. Or it might be a bad contract we signed that ends up affecting our life’s options and choices. Or it might be a decision made with respect to a personal or business relationship that turns out to have not been very well thought-through or handled. Or a business venture marred by poor strategic decisions. Germane examples are plentiful.

The second category is the things we didn’t do that cost us so dearly – acts of omission. For many, this is a much more painful source of regret. It is in failing to act on something that we have felt deeply about. It is settling for a job that everyone around us thinks we should take – instead of striking out in a bold, new direction. It is in working for the prestigious firm that we imagine will bring happiness, instead of pursuing a passion – even one that would potentially bring initial scorn or derision from others.   It is in ducking and running from someone who we have loved and even loved deeply (and perhaps still do, yikes!) to avoid the possibility of getting hurt. Again the examples are numerous. Knowing that action could have and should have been taken can be a bitter pill, particularly for people of action and achievement. The results can be painful: a high-paying job that brings little intrinsic satisfaction; a fancy title coveted by most on the outside world, but hollow to the holder of that title; a life spent with someone other than one’s soul mate.

With that dreary back-drop, what is a champion to do with this worst of emotions? Suffer in silence for years, as is often the case? Regardless of the source, winners learn from experiences – even pain – and come out better on the other side. The very sources of regret can sometimes even be fixed with enough honesty (and bravery). In business and in life, it is never too late to pursue what you love. This is the highest and most elegant expression of mankind. Living life on your own standards, and according to your own convictions, and letting the chips fall where they may. From today forward, channel those emotions to create the action that will put you in a place that when you wake up each day, it is not filled with lethargy, but rather with the person, business, passion, and function, that fills you from head to toe.